Not much to say about this flight ... As it was my shortest XC flight EVER!!! :-D 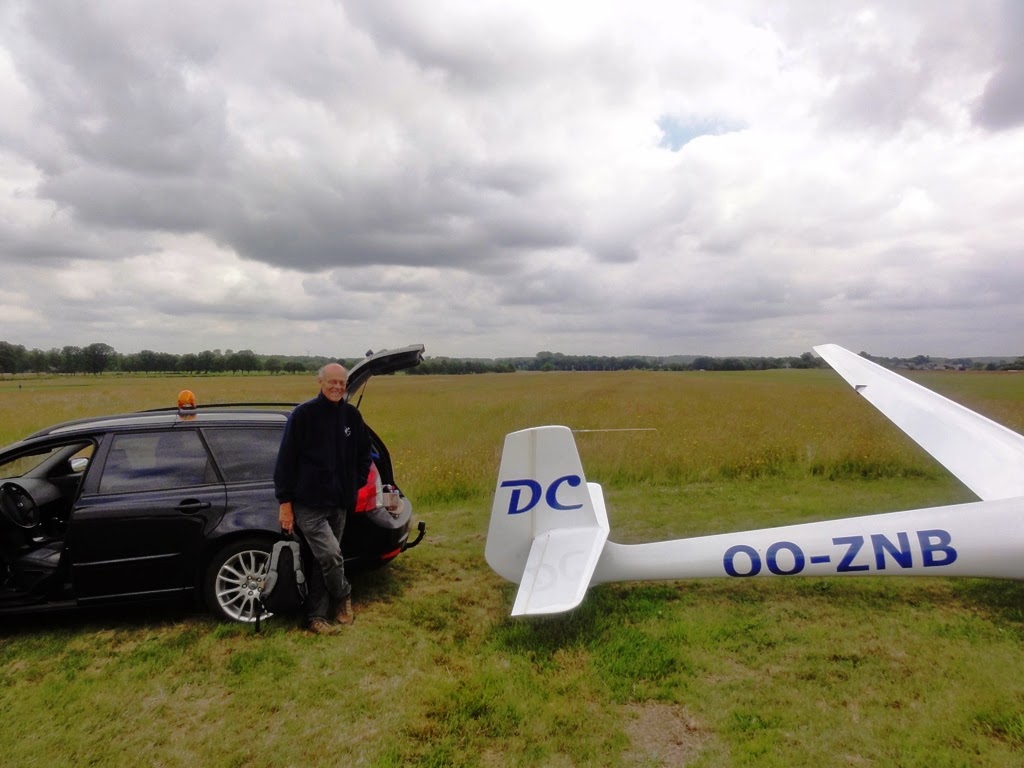 Waited till the weather improved 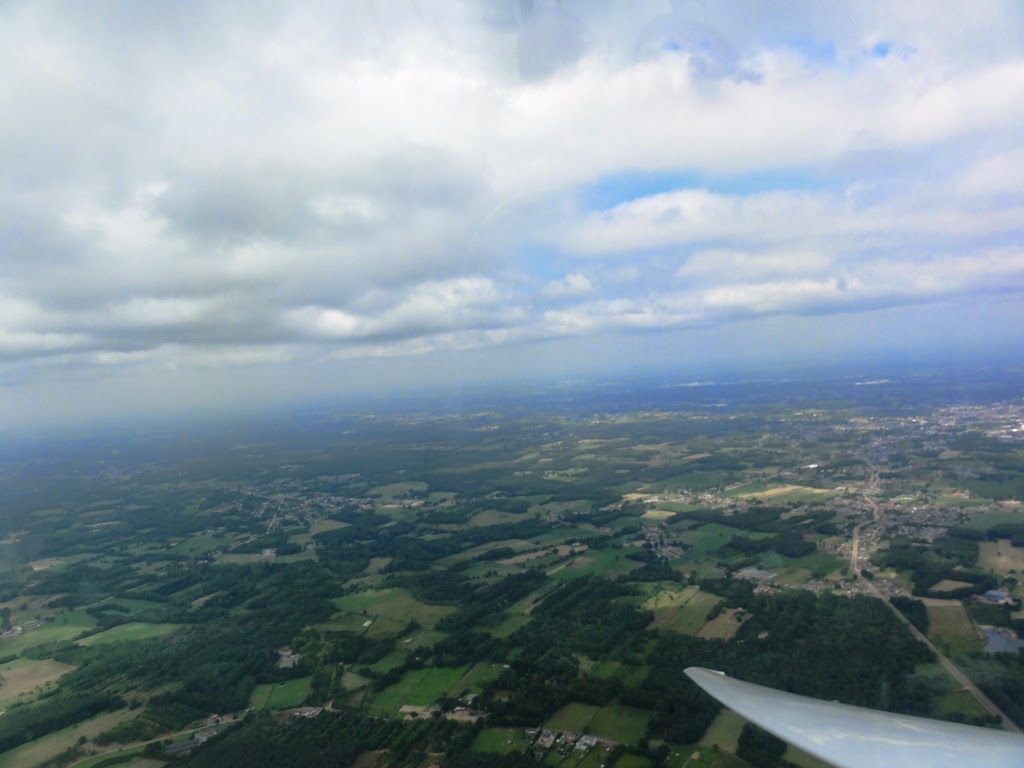 After tuning a 2m/s I was convinced it was good enough to start. 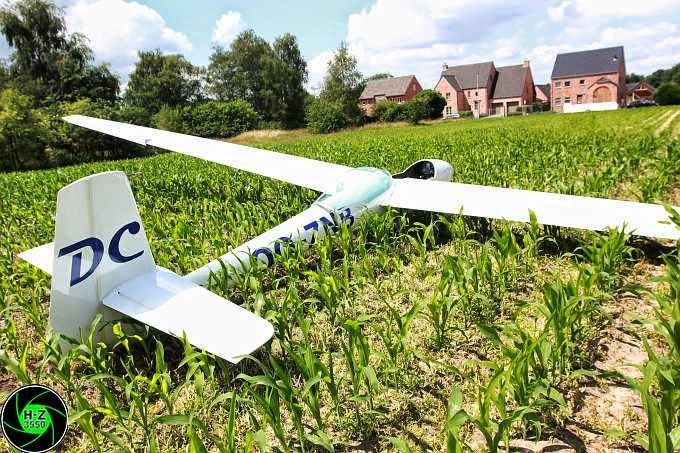 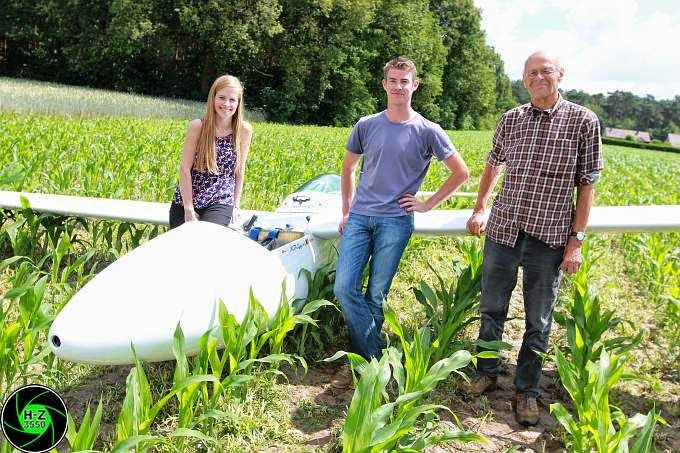 My lovely sister Jilll and my biggest fan Harry as my retrieve team! 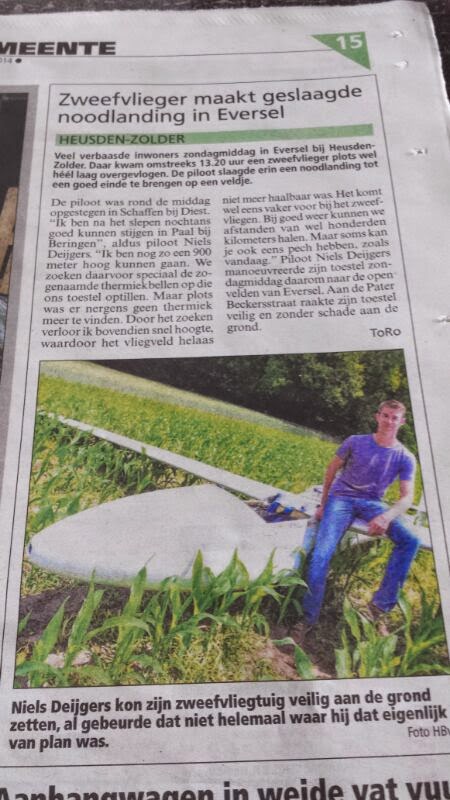 Even made the news paper with "emergency landing ".

I'm not having a lot of luck with my competitions this year.... Weather predictions of the Kiewit cup are hot, blue and chances of thunderstorms.... not the ideal conditions for soaring.

Bruno and Joost in formation

In the after noon the sniffer told us it was hopeless to fly the task so we de-rigged the gliders and had ourself a beer or 2 or 3 or 4 or ....

Briefing was at 11am as a small front needed to pass, but it looked like we are flying today!
We go an AAT of 1h30m, I think this is the best task to give with this kind of weather.

Unfortunately I only have one picture of today as I forgot to take any in flight....
We had some cumulus clouds but not very convincing ones they disappeared quickly.
In the 1st sector there are no cumulus and not even in the 3th, so only a small region with cumulus clouds is available.

My deadline to take the start was 15h and at 14:55 I decided to take the start, Just touching the first sector and with a little cloud street half way the second leg I could take the second turn point at the north west.
By doing this I could fly North of Kleine Brogel and stay with the cumulus clouds.
Just 5 min over time I finished with a nice low pass :-)

A thunderstorm front is approaching so the day is cancelled as well...
The day result of yesterday is the total result so I finished 3th.

Belgium and the Netherlands are covered!

To close the blog a picture I found on the Libelle gathering site.

All packed and ready to go, we left around 10 am in the direction of Hahnweide, no big problems on the road and only a small traffic jam at the end. We arrived around 17 pm and started rigging the DUO.

I'll bet this is a fast transport firm ;-)

Tijl after a small local flight.

Difference between a boy and a man, the price of his TOY's.

Raf and Harry kept a close eye on us.

First competition day with a small task of 152 km,
the weather wasn't that easy with a lot of weak thermals and low cloud base.

Waiting in grid for the weather to improve.

What a BEAUTIFUL landscape!

At our last turn point struggling to get up on final glide.

Happy with the flight!

Rewarded with a nice sunset!

A 7th place, not bad for a first day!

An other flying day! But in grid we already noticed that there was a lot of wind and in the upper air layers we saw some lenti clouds. The meteo man predicted some cirrus cover in the early afternoon and this in combination with a lot of wind....This is going to be an interesting day.

Early in the morning.

Already some cirrus and lenti clouds in the air.

Working our way up before the start at the Heuffener castle.

Thermals are weak and disturbed by the wind and the cirrus clouds, our pace is not that high but we saw other struggling as well. And on top our left wing was leaking.....But we are keeping our hopes up!

As we turned our first turn point we are flying under a cirrus cloud, the problem was due to the wind it was always one step ahead of us.... So each time we were flying to a cumulus cloud is was gone when we got there! Very, very, VERY frustrating ....
Near Hahnweide we decided to take a gamble and go in to the blue, this was a risk because of  the other air mass. But I thought its been sitting there in the sun for a couple of hours it will give us at least a decent 1m/s climb. Was I wrong.... 15min later we were standing at Munsingen ( home airfield of Uli Schwenk ).
So we took an air tow back to Hahnweide.

I told Didier that I would be very surprised if someone could finish the task, but they did!
The people that know the area much better then we did it, today was a big loss in points....

They canceled the day quit early and to do something Didier and I decided to go for a bike ride.
Where else to go to then the Teck, a lot steaper then we thought we made it to the top after 1h30m or so.

A break from the steep climb.

Nature at his best.

Rewarded with a great view and some raindrops.

Hahnweide seen from the Teck

An other day canceled....
So it was city trip time to Stuttgart!

In the morning it looked oke, but the cloud base was very low...

In the evening socializing with the Schmelzer family.

The weather improved and we could rig our DUO again, but not for today as all the moist still had to evaporate. But we could prepare everything and focus on hopefully a flying day tomorrow!!

Some people can learn from this.....

In the evening Tilo and Uli held a presentation of their Grand Prix a few weeks ago.

We went in grid and listened how the people of Kircheim celebrate fathers day. With tractors full of speakers, loud music and a lot of beer they walked trough the forest near the airfield.
After waiting till 14pm they cancelled the day....
Still no flying...... this is getting out of hand! We want those nice cumulus clouds with rising average of 3m/s that the beautiful Schwabische Alb can give!!!!
We took our running shoes and decided to run of our frustrations....
And also take a look in the hangars here at Hahnweide and what they have to hide :-)

A window in the wing so the passenger could see the ground.

And some strong liquor to wash away the left over frustrations.

Meteo man was quit positive today that we could fly! So we filled the wings with water and went to the grid.
There the waiting game began.... again....

A lot of winglets

There was a lot more moist in the ground and forests then they expected and every time the sun came trough it was gone a little bit later.
At 16pm they cancelled again....  But Didier and I decided to fly anyway! We are tired of standing on the ground.

At the ridges of the Alb

One of the many many airfields at the Alb

A convergence line popped up :-)

Nice seeing your own shadow that close with a halo around it.

Marc ( the competition director ) told me that he was so depressed when he had to cancel today that he locked himself up in his office and opened a bottle of Havana... I think we all understand :-)

We didn't took a good start, we released from the tow plane and 10min late we are standing back at the airfield..... Dammm! Oke, second attempt! This is a better one, with a little struggle we could make it to the top of the Alb ridge and found a better thermal. Didier and I decided that 13pm was the latest we would start. We made it to cloud base at 12:50 and just before the start line so this was the moment!

The first leg went great and after a few km's we joined with LL ( Sigi Baumgarthl ). I said to Didier lets follow him for a while. As we came closer to Klippeneck and we had to fly across the valley to the Black Forest I said to do it a little slower and maintain altitude. But when we arrived at Klippeneck there was a beautiful cloud street standing right in the direction of our turnpoint!

The once in a life time cloud street!

Above the Black forest.

LL still with us.

We could make a great airspeed above the black forest and on the second leg we where flying with a task speed of 120km/h!

Here we are going well, we even lost LL :-O
Once out of the black forest on our 3th leg the thermals were a lot weaker and more unstable, we had to satisfy with an 2m/s with and avrg. of 1,5m/s or something. Near Heilbron we found a better thermal and we could fly to our 3th turn point.

Pforzheim  the North exit of the Black forest

After our 3th turnpoint where I think 3/4th of the 20m class was turning here, the speed went up again, one 3-4m/s thermal after the other!

Near Aalen close to our 4th and last turn point

What a flight! It felt good and it was good!!! 5th place :-D
We did our best against the almighty Arcus's....
But still not to bad for the oldest Duo Discus on the planet ;-)

They should really think about a handicap in the 20m class because the difference between the Arcus and a Duo Discus is to much.... A lot of people even think that the current handicap is to low and it should be equal to the Ventus2CX.

Total result... Not that well as we F*cked up on the second day :-)

Congrats on Bert for his first place!
Thank you Marc and your team for this well organised competition we enjoyed it and hopefully till next year!! Also a great end party btw ;-)